Development has been going pretty smoothly since the start of this year. In June we concluded the alpha which was focused on the player's critical path. Now we are halfway through the beta phase, which is focused on optional content, mostly late-game.

Today I want to talk about a simple mechanic from Raider Kid and the Ruby Chest that is also my favorite one: the dowsing pendulum! 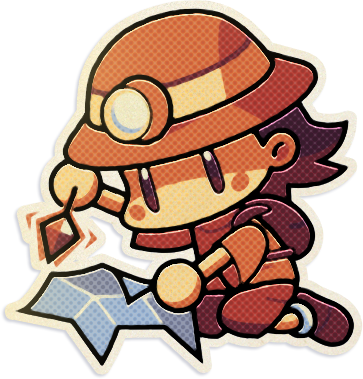 Although Raider Kid was created to be a quick project with more focus on level design than innovative mechanics, it has exploration at is core, so experimenting with mechanics that were directly related to exploration was something that I was willing to fit in the game's scope.

I always thought that maps in exploration games could be designed to be more part of gameplay, and wondered how could we make the act of reading a map something more interactive. So, in Raider Kid, instead of giving away the position of secrets in the map (like Metroid does) I decided to add a mechanic that requires the player to play around with the map screen to get that information.

Basically, you move the pendulum around, and the more it vibrates, the closer it is to a hidden item. It requires a sharp eye to pinpoint the exact pixel the pendulum is vibrating the most, so we somehow keep that vagueness that you see in Metroid maps, but at the same time give the player the opportunity to hypothesize a more precise answer based on their readings.

I have memories of my great-aunt using a crystal pendulum to measure the positive energy in me when I was a kid, and then using it in an Ouija-like board to see my future. Most games that have a dowsing mechanic do that integrated with the main gameplay, but I thought doing that in the map screen was closer to how diviners use pendulums in real life (I should probably make it clear that dowsing in real life is based on superstition, but it makes for a great game mechanic nonetheless).

I want to expand on the idea of having a more interactive map in future projects, and I am happy to see that games like Chicory have features such as allowing the player to add information to the map by taking photos of those locations and pinning them to the map itself.

That's it for today! As most of the content we have been developing lately is kind of spoiler-ish, there aren't really a lot of things we can show right now, but as we get closer to the release we will be making more posts like this :)

One small recommendation that I would make is to possibly change the action key, you have set to z to space or to make it more obvious to noobs like me that it is z. I spent a minute or two keyboard mashing to get past the title screen and almost left before it started which would have been a shame cause the game has an awesome premise.

Creative and thematic, looking forward to this guys!

I never though about that, sounds really fun!!!